A butterfly flutters in light blue

Until the 19th century, Chora was the only settlement of the contemporary years of Astypalea. The other settlements which exist today were created in the uncultivated spots of the island. The biggest of these settlements are Livadi and Analypsi or Maltezana, created during the Italian years. Most of the islands' life is concentrated at Chora. It is built on a peninsula which is bathed by the serene sea creating two tranquil bays called Pera Yalos which is situated on the left as we look at the open sea and Livadi which is on the right.
The Venetian Castle, with its two whitewashed churches, stands proudly at the top of the peninsula proclaiming the onset of the development of the settlement. As the centuries progressed, little white houses began to appear outside the walls of the castle which covered the hill and reached the port of Pera Yalos joining together to form a mosaic of our islands history. The portrait of Chora with its white body and ocean blue heart, leaves the visitor speechless because of, its beauty and harmony. The Castle takes up all the plateau at the top of the hill and used to be densely built group of houses which made up the Middle Ages settlement. Today, only a few of the houses have survived, the outside walls of which make up the walls of the Castle. Only on the southside is there a strong battle tower which is known by the name “Serai”. Inside the Castle, between the scattered columns and the carved stones, two beautiful churches, Panagia of Castro (the Holy Virgin of the Castle) and Agios Giorgios (Saint George) stand. The church of Panagia of Castro was built in 1853 on the arched entrance of the castle. Inside there is an ownership signature of 1413 and the shields of the Querini family. Agios Giorgios was built in 1790. Around the walls of the Castle the uniform white houses, with blue stutters and wooden balconies, the churches and all the small family temples are clustered together.

The balance of white and blue is cut of by the red shade of geraniums which blossom in the pots of the narrow, stone-cobbled lanes. In the old neighborhoods of Chora, there are no great-open spaces, no squares. The Astypalean traditional houses are similar to those of the Cyclades. Moreover, the cycladic colour seems as though it surpasses the dodecanese colour around the island. The most interesting part of the house other than the fireplace and the divisions of the walls, is the wooden loft in the far part of the room decorated with lace, woodwork, which was used as a bed. It has a height about two meters and to reach it, one must climb a ladder which is formed by three wooden trunks, one placed on top of the other. Next to the bed, three or four rows of carved, wooden shelves make up the “Krijola”, on which are kept the most beautiful and the best glassware of the housewife. The wooden ornamentation of the bed, the Krijola, the door and window cases and the ceiling is a sample of the excellent wood-carving craftsmanship which developed in Astypalea.

One of the most characteristic pieces of work of this art is the carved, wooden ceiling of one of the houses inside the castle; the only one which has been saved today.The special ornamentation of Chora is its eight preserved windmills along the turning of the hill from which the new houses (suitable to the surroundings) decline towards the port. Near the windmills, the traditional cafe of Chora is found and a bit further up is the Mayors office from where the two main roads begin their ascent towards the castle.

Megali Panagia is formed by a group of five temples which, having a view of the sea, create a unique picture. The special feature of this church is its cobble-stoned courtyard. Panagia Portaitissa makes up the religious center of the island with the largest amount of homage. It began being built in 1762 by the blind Osios Anthimos from Cephalonia who before building Panagia Portaitissa, has built the monasteries of Zoouthochou Pigis at Sikinos and Saint George at Castellorizo. The construction of the church lasted nine years during which the tradition has it that many miracles occurred. It is dedicated to Panagia Portaitissa of the monastery Iviron, a copy of whose icon Osios Anthimos brought to Astypalea. On the 15th August when the celebration of Portaitissa is held, there is a grand festival with violins and utes. Near the monastery the ecclesiastic museum of Astypalea is on display with rare heirlooms of unique craftsmanship.
The rippled coastline of Astypalea is nothing more than a constant game between the land and the sea. In about the middle of the island, the land narrows so much that a strip of land, only 100 meters in width, connects the two parts.

Steno, as the local townspeople refer to it, divides Astypalea into the eastern part known as the “Inner Island” and the western part known as the “Outer Island”. The concrete road towards the “Inner Island” stretches past the successive beaches “Marmaria”, “Steno”, “Plakis” and the “Blue Limanaki” until it reaches Analypsi or Maltezana after a total of 9 Km. Just a little before the town, a fork in the road leads to the airport of the island (10 Kilometers from Chora). Analypsi is one of the three towns of Astypalea. It is also called “Maltezana” because it was first settled by Maltese pirates.

The town, which is usually made up of mainly summer holiday visitors, embraces the bay with its long dock where fishing boats come round and includes the orchards and vineyards of ascends through the steep mountains of this side of the island, offering a panoramic view of Vai bay, and ends up at the closed bay of Vathi.

At the serene site of Mesa Vathi, a beautiful church, a tavern, a few houses, and a few fishing boats at the small dock can be seen. The visitor can reach Vathi either from the passable dirt road or by the boat which conducts frequent trips from Vai. Vai can be reached by the bus which leaves from Chora. Before the road to Vathi begins, a difficult dirt road ends up at the monastery of Panagia Poulariani.
Returning to the “Outer Island” and after Steno, a dirt road begins which leads to the small port of San Andreas (1 Kilometer) where a small tavern can be found.

Another route from Chora runs through the mountains of the Inner Island whose curves are smooth. The panoramic views of Chora and Livadi at the outset and the view of the tranquil mountains with the scattered, white monasteries offers a unique pleasure to the viewer. On this same route is the monastery of Flevariotissa. Since the monastery of Flevariotissa’s festival is celebrated on the 2nd February, it is the winter rendezvous of Astypaleas' friends from all over the world. This route comes to an end in the area called Agios Ioannis (Saint John) which is 16 kilometers away. The picturesque, whitewashed church is set between two abrupt hill slopes near the open sea. In front of the church, on the hill, there are orchards and bubbling water sources and, further down, after quite a bit of walking, there is a superb beach.

On the right of the church, high on the edge of the mountain, there are the remains of the old castle. Near Chora is the village of Livadi which is the blossoming garden of the island. The orchards, which are overflowing with tangerine trees and orange trees, the vineyards, which are seething with their juicy grapes, and the houses which are surrounded by numerous, multi-colored flowers, stretch throughout the ravine and wind up at the beautiful beach. From Livadi, a passable dirt road begins which provides a truly breathtaking view of Chora and connects Tzanakis, the cut off nudist beach, to Chora; and, after passing a number of small coves and Papou beach, it ends up at the enticing, sandy beach of Agios Konstantinos.

Two of the most beautiful beaches of the island can be reached by the tourist boats which set off from Pera Yalos and Maltezana. These beaches are Kaminakia, where there is a tavern which serves boiled goat (stew), an island specialty, and Vatses, where there is a cave with stalactites and stalagmites.
Guest reviews 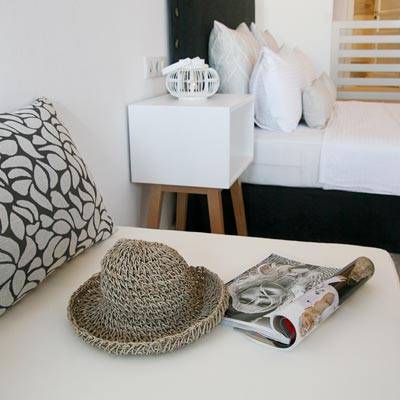